Usually one can spot people who are not serious and are imitating. We even have a story from the early history of our brotherhood…. In San Francisco there was one who got on fire with the idea of the Jesus Prayer. He began adding prayer to prayer, and he finally came to, in the morning, 5,000. Right in the middle of the world, in the middle of the city, in the morning, before doing anything else, before eating, he was able to say 5,000 Jesus Prayers on the balcony, and he felt wonderfully refreshed and inspired. It happened one morning that somebody else came out right underneath the balcony and began busying himself and doing something while this person was saying his last thousand, and it so happened that this person was so put out by this that he ended up by throwing dishes at him! How can you deal with a person occupying himself with the spiritual life, with the Jesus Prayer, when all of a sudden, while he is saying it, he is able to start throwing dishes?

This means that inside of him the passions were free, because he had some kind of deceived idea or opinion that he knew was right for himself spiritually.  He acted according to his opinion, but not soberly, not according to knowledge; and when the opportunity came, the passions came out.  In this case it is more profitable not to say those 5,000 Jesus Prayers, but to do something else that is spiritual.

This, then, is not where we should be fighting the battle.  We should begin fighting the battle right on the level of awareness, by being aware that we are surrounded by worldly forces.  We must fight them by keeping our minds constantly up rather than down; that is, having in mind heavenly things.

– Homily ‘In Step with St Patrick’ 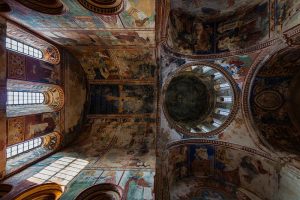