“The believer’s holiness is the fruit, expression and reflection of the incarnation of the Son of God. He became like us so that we may become like Him. Taking inspiration from His example, as well as from the model of the saints, whose synaxis we commemorate on the Sunday of All the Saints, we can get a realistic image of holiness. Here is some of what holiness means with regard to ethical behavior in its various forms:

That you hear and listen. This means that you empty yourself so that you may be ready to listen to the other. That you take him seriously. That you respect and honor him according to his worth, that is, to the degree that Christ honors him. In the same context, it means that you learn to listen to God who speaks to us through various means in order to reveal to us His will and His love.

That you speak such that your words become a reflection of your building up the edifice that God desires to be His dwelling-place, an edifice not made by hands, whereas the human person is a repository and vessel for the Holy Spirit. That when you address the other, you feel that you are addressing God on his behalf or addressing them on God’s behalf, so you place bonds of love and God’s will as the framework within which your desires and your will move. Prayer and addressing others has a single final purpose, which is to sanctify souls, to strengthen harmony and to persist in faith in the incarnate Son and the Father who sent Him. 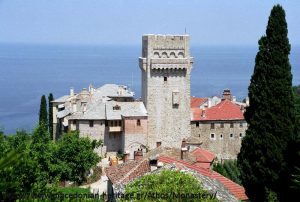