St Tikhon on the Church in America

“…due to the mercy of God, the Church up to this day, now here and now there, gains victory and is triumphant over her enemies – and she has many of them.  It is not a coincidence that the Church is likened to a ship, sailing amidst a ferocious, stormy sea which is ready to drown it in its waves.  And the further the ship sails, the harder the waves slam against it, the fiercer they attack it!  But the harder the waves hit the ship, the further they are thrown away and rejoin the abyss and disappear in it, and the ship continues its triumphant sailing as before.  For “the foundation of God standeth sure” since the Church of Christ is built on an immovable rock, and ‘the gates of hell shall not prevail against it’.    The Church of Christ is the kingdom not of this world.  It does not possess any of the attractions of the earthly world.  It is persecuted and slandered.  Yet it not only avoids perishing in the world, but grows and defeats the world!  This happens everywhere, and here in our land as well.” 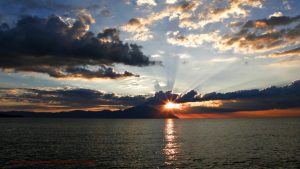