“Man is God’s preeminent creation. He surpasses all the other creatures, because the Invisible, the Incomprehensible, the Indescribable Lord in His omnipotence, His omniscience, His strength, has created man thus in a two-fold way, ‘in the image and in the likeness of God’ and according to the sense, as is the other creation, the material one. He is in the image because God is Spirit and man is spirit, God is everywhere present, and man goes everywhere with his intellect. God ;reated everything that we see and everything that we don’t see. The things we see are corrupt; those we don’t see are ncorrupt, eternal. Man sees his body, because it is matter, vhich is comprised of five elements (earth, water, air, fire tnd air). Bones come from the earth, and liquids, such as the )lood, come from the water. The temperature of the body comes from fire. From the air come all the airy components which circulate in the blood, such as the oxygen which is necessary for oxygenation. From the ether come the components of breath and of smell, which breathes and provides life. Of course, all the animals and man have these. Man, however, has an element which he can neither perceive, nor reject. He has a spirit, which we call soul. This spirit is an essence, it does not have five parts as the body does, and it is this which gives excellence to man.” 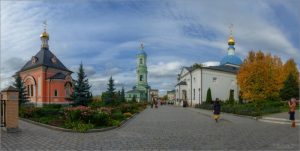