The third benefit of frequent confession: even if someone has fallen into a sin that leads to death, if he immediately flees and confesses this sin, he enters into the grace of God and his conscience is not weighed down under the heaviness of the sin, for it is cleansed through an immediate confession.

The fourth benefit of frequent confession is that when death approaches a person who confesses often, it finds him pure and in the grace of God, thus having great hope for salvation.

According to St. Basil the Great, the devil is never absent from the death of the righteous and the sinners, seeking to find man in a state of sin so that he can claim that soul. He can find nothing in those who confess often and completely, because they have repented and received absolution for their sins.

The fifth benefit of frequent confession is the fact that the person stops himself committing from sin. Why? Because he realizes that after just a few days he will have to confess again and will certainly receive a penance from his spiritual father to counter-act those sins that he has committed.

When someone confesses often, all he has to do is remember his shame before his spiritual father and the penance that he will surely be given, and he will do all he can to keep himself from sin. Man has so much strength to use against sin; even if all the devils from hell were to come, they would be powerless to do anything to him if he would just oppose sin. This strength to overcome the temptations of the devils is given to each of us by God at the time of our baptism. If man did not have this strength to oppose sin, then hell would not exist to punish sin. Haven’t you read the words of the Holy Spirit in the Psalter, “Lord, Thou hast crowned us with the shield of free will.” And Solomon says, “God has created man and left him to his own devises.”

– From the ‘Counsels’ of  Elder Cleopha+ of Romania 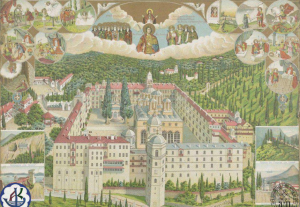