Elder Ephraim+ of Arizona on the Fall

“Christ humbled Himself out of obedience to His heavenly Father. He obeyed as a man in order to teach us the lofty virtue of obedience, for without humility, one cannot approach God.  We see that Adam and Eve in Paradise were happy as long as they were obedient and kept the commandment of God— that is, not to eat the forbidden fruit. They were the king and queen of all creation; they ruled over all; they were happy, and they felt and saw God. The life they lived was the most blessed life. They had the protection of God; no one troubled them; no one condemned them. They were free to walk within Paradise without fear, without a remorseful conscience. Why? Because they had not fallen into any sin against God.

Later, when they misused their freedom and wanted, as free beings, to transgress the commandment, they did so and sinned against God. Right after their sin, remorse leaped up. Immediately after their fall, their consciences began to disturb and oppress their souls. It is clear that the reproof of the conscience was a result of transgression, of sin.  After the Fall, Adam and Eve found themselves at an impasse. “They heard God walking in Paradise,” say the Scriptures, “and they were afraid and hid themselves”!  Previously, however, when they had not sinned against God, why weren’t they afraid of Him?…But they were not afraid of Him then because their conscience did not reprehend them; it was full of tranquillity and peace, and so they also remained at peace.”

– ‘Counsels from the Holy Mountain’ 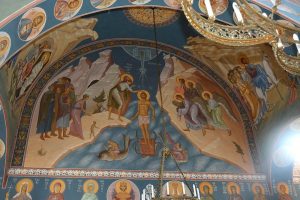