The Lord takes away sinners when they have reached the limits of evil.  That is also something obvious to us.  The person carried on disgracefully, and the Lord took him in the act, when he had reached the point of evil. But here as well, there are sometimes exceptions.  For example, the Pharaoh, the king of Egypt, crossed the line into evil, but the Lord left him alone.  Why?  So that He might demonstrate upon him God’s power and glory, so that all peoples might hold the Name of God in awe.  He graphically made it clear how you should not behave, and what would happen to those who behave badly.  The Lord specifically states that in His eyes, [Pharaoh] was already a dead man, but that he was left alone so that the fullness of Divine Might could be demonstrated – as a graphic exhibit  to make a point, if you will.  It is in this vein that  here are cases of extremely lawless people remaining on earth.   The Lord leaves them here specifically so that He might then demonstrate His glory upon them, and remind people that they should not become attached to the earth. The earth is not the Kingdom of God, in the sense that it is not a place where people will live for eternity. 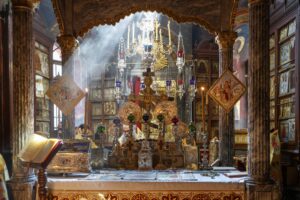