mbonds October 16, 2022 Elder St Porphyrios on Tongues…2022-10-02T09:30:11+00:00 Modern Orthodox Elders
“Whereas Peter the apostle was speaking his own tongue, the language was instantaneously transformed in the mind of the hearers. In
an ineffable way the Holy Spirit made them understand his words in their language, mystically, imperceptibly. These miraculous things
happen through the action of the Holy Spirit…‘house’ would be heard by the person who spoke French as ‘maison. It was a kind of gift of clear sight; they heard their own language. The sound struck their ears but in their minds, through divine illumination, the words were heard in their own tongue. The Church Fathers don’t reveal this interpretation of Pentecost very clearly, they aren’t afraid of distorting the mystery. The same is true of the Revelation of Saint John. The uninitiated are unable to comprehend the meaning of the mystery of God.”
– Wounded by Love 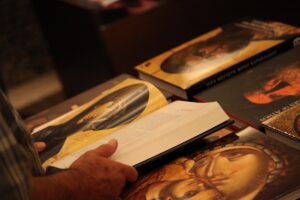